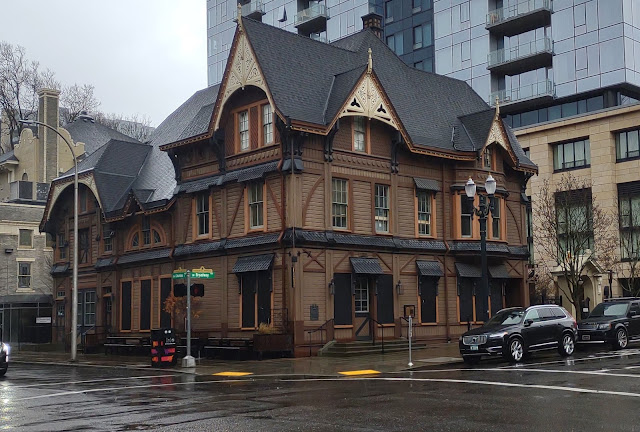 Downtown Portland suffered yet another loss thanks to the pandemic, sidewalk campers and risk of hooliganism as the Raven & Rose restaurant and bar closed up shop in one of downtown's last and oldest wooden buildings.

The upscale restaurant and its charming upstairs bar opened in the historic Ladd Carriage House in 2011, after the former barn was saved from demolition in one of Portland’s most dramatic and successful preservation efforts.

In 2007, when the building was 124 years old, it was jacked up and transported three blocks away while its original site could be excavated to provide underground parking for the big glassy adjacent apartment tower.  The carriage house returned to its original location in the 1300 block of SW Broadway in 2008, and underwent a massive internal makeover leading to creation of the restaurant and bar.

You can see some of the move back to its original location is this video. It is amazing to think there was only a couple feet of  clearance bringing the structure along SW Columbia Street.

The good news is that the building is not in immediate jeopardy of demolition.  It is virtually turn-key ready for any potential new restaurant and bar operation.  But a new tenant is not likely to be found while the city grapples with homeless people living in tents on sidewalks and the threat of windows being broken and other damage being inflicted by roving bands of masked hooligans and anarchists.

Uh, hello City Hall?  Anybody home? Anybody there remember the Portland we used to know? 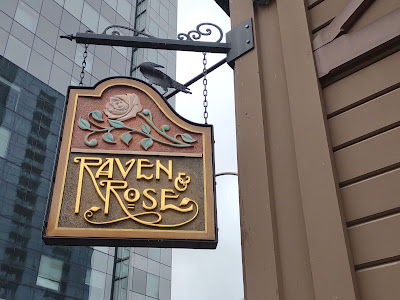 Of course, change is nothing new at the carriage house.  It was built in 1883 by William Sargent Ladd, a successful banker, property developer and two-term mayor back in the 1850s.  Ladd also built a 30-room mansion across the street to the east, which eventually became absorbed into the expanding downtown and in 1948 became the new home of the Oregonian newspaper.

In the 1920s, the main floor of the carriage house was converted to small shops, with an apartment and dance floor taking over the upstairs hayloft.  Later yet, the building housed an architect's office, a major construction firm and, later yet, law offices.

In 2004, the Frist Christian Church raised the possibility of demolishing the carriage house to make way for the residential tower.  In part because of outcry from preservationists, the church agreed to change the location of the new tower on the same block and to let the carriage house be moved to the parking lot of another church to allow excavation for parking.

As the building was prepped for its return journey, Cathy Galbraith, then one of Portland’s leading preservationists and director of the Bosco-Milligan Foundation’s Architectural Heritage Center, said, "This embodies historic preservation at its finest.  This is really a pivotal moment for our city."

While its original use was humble, Portland architect and historian William J. Hawkins III ranked it among the best of Portland’s remaining early buildings.

One hopes that it once again can become a vital element in downtown Portland, when the sidewalks are clear of campers and when windows need not be boarded up for protection from risk of wanton destruction.