As a year filled with political and social turmoil grinds to a close, let’s take a few moments to recall some excellent achievements for preservation in Portland.  These people and projects deserve our thanks for their skill and perseverance in saving important architectural history. . 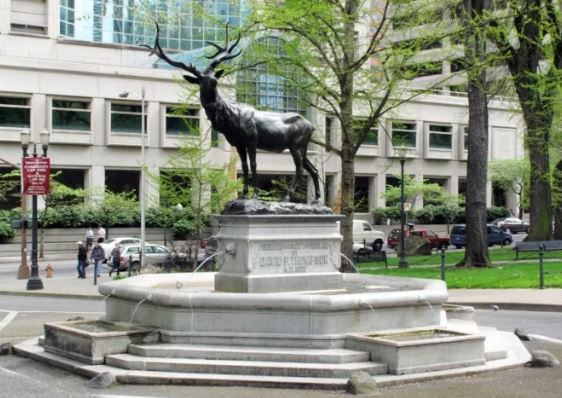 This ad-hoc group of preservation and political veterans conquered difficult odds in convincing the Portland City Council to restore the David P. Thompson elk statue and fountain in its historic location in the middle of SW Main Street.

While the City Council decision appears to be firm, restoring the fountain remains a difficult and time-consuming matter.  No city bureau wants to take charge of it, and assessment of damage to the granite fountain and its water-retaining ability is on-going.  The landmark is unlikely to return within 2023, but there is every assurance that The Elk Fountain Committee will continue its vigilance. 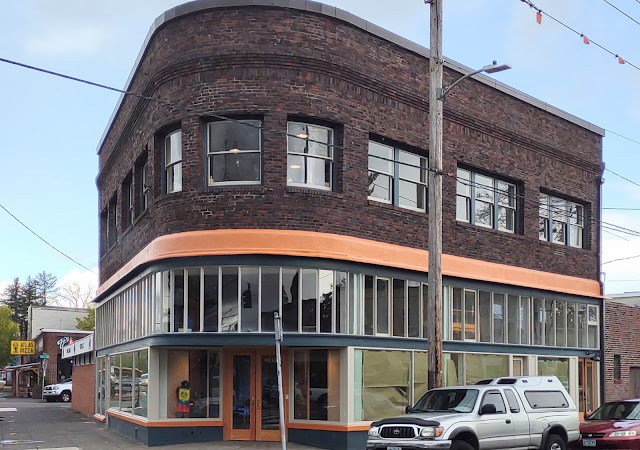 Matt Froman knew almost nothing about historic preservation when he took on restoration of the erstwhile Phoenix Pharmacy building on S.E. Foster Road two years ago.

Froman partnered with preservation veterans Rick Michaelson and Karen Karlsson for strategic help, but acted himself as general contractor, laborer and leasing agent for the renovated structure.  Its primary tenant is now Foster Outdoor, a retailer of camping and outdoor goods.  The upper floor is a suite of attractive offices.

This easily-recognized building was erected 100 years ago with a façade that curves gently along the  acute angle of its trapezoidal lot.  From its opening in 1922 until 1946 it was the home of the Phoenix Pharmacy, operated by the much-admired pharmacist, John Leach.

But after sitting mostly vacant for 20 years, the building needed a new roof, seismic bracing, new electrical and mechanical systems, windows and store-front system.  Froman’s dedication to the neighborhood landmark is a grand example of the enthusiasm and diligence required for successful preservation projects.

After being stalled for two years because of the pandemic, the non-profit Hollywood Theatre successfully completed restoration of the ground floor façade, bringing a historic unity to the wild and wacky Roaring 20s architectural design fronting on N.E. Sandy Boulevard.

Construction and opening of the theater in 1926 was sufficiently dramatic that the whole surrounding commercial neighborhood became known as the Hollywood District, a name it still bears today.  In its heyday, the theater was Northeast Portland’s challenge to Downtown Portland as a venue for live productions and movies.

Sometime in the early 1960s, the ground-floor façade sadly was “modernized” and much of its terra cotta details were stripped away.  Building manager Virginia Durost and architect Paul Falsetto supervised and designed the restoration.  One piece that remains missing is the original freestanding polygonal box office, which could not be replaced because it would have blocked passage for some attendees with disabilities.

While the exterior of the theater is now in excellent shape, much interior work remains to be done.  It is a credit to the organization that it is devoting careful attention to the building’s needs to that it can remain a vital landmark into its second century.

Join building on History’s website by writing “add me” to fredleeson@hotmail.com

A six year fight that finally led to the acceptance of the Eastmoreland Historic District on the National Register of Historic Places is significant for two reasons.

First, it likely will be the last such district proposed in Portland for many years to come.  Building a historical record that meets requirements managed by the federal Secretary of the Interior is a complex and expensive process.  The rules fall outside the scope of Portland’s own zoning rules, which have drawn the ire of local officials and some residents in the historic neighborhoods.

Second, the process finally defeated fraudulent efforts by a handful of Eastmoreland residents that tried to create trusts with several thousand “members” who could vote against the designation.  Interestingly, no people were attached to these trusts; they simply were numbers on pages recorded at the county recorder’s office.  The rules later were amended so that only real parties who had the ability to sell a property could vote.  The later count was 70 percent to 30 percent in favor of the designation.

Eastmoreland now joins Kings Hill, Ladd’s Addition, the Alphabet District, Irvington, and Laurelhurst as Portland residential neighborhoods qualifying for the national recognition.  For the preservation community, the primary benefit of these designations means that buildings identified as “contributing” elements cannot be torn down without a public hearing that weighs the reasons for and against demolition.  In essence, it prevents developers from picking off individual lots to tear down houses and build bigger, fancier ones.

The Eastmoreland district is composed of 475 acres containing more than 1,000 buildings that meet the era of being constructed between 1910 and 1961.  The district also includes the Eastmoreland Golf Course and the scenic Crystal Springs Garden.

The neighborhood’s general plan follows the early 20th Century City Beautiful planning movement, with a long grassy esplanade along S.E. Reed College Place and east-west streets following the gentle flow of the topography rather than being carved into rectangular blocks in an urban grid.

As an early Portland suburb, Eastmoreland’s attractiveness drew several of the city’s most prominent architects.  Their designs fell mostly into the popular historical architectural revival styles of the early to mid-20th Century.

Earlier this year, the Portland City Council revised its code for historic resources to include new incentives for specific landmarks and historic districts that could be designated by the City Council, exclusive of the federal rules.  While those rules were supported by preservationists, there so far has been no interest exhibited by the City Council or by the city Planning Commission for any new designations.

Cities by their nature, of course, are in continual flux.  There is no way of predicting eventual success or failure of the city’s own new rules.

One encouraging thought for architectural preservationists is that we don’t have to worry about saving “historic” projects that never made it off the drawing boards.  This inspiration is prompted by a new exhibit at the Architectural Heritage Center called Unbuilt Portland.

The exhibit includes a dramatic painting showing 15 bulky stories of apartments grafted atop the old Masonic Temple (shown below) that is now a part of the Portland Art Museum. Among other non-starters is a tall spire that thankfully was never added to A.E. Doyle’s classical Roman temple of the U.S. National Bank downtown, some underground parking and highway plans..

The prospect of failed proposals brings to mind another major project not mentioned in the AHC exhibit.  It was a plan submitted to voters twice in 1964 to build at 64,700-seat domed stadium close to Delta Park in North Portland.  Proponents hoped the $25 million project would land a major football or baseball franchise, and perhaps even the U.S. Olympics.

The concept of a domed, multi-purpose stadium was still new in 1964, when Houston’s Astrodome was not yet completed and several other cities were conceiving stadia that could house both major league baseball and football teams.

The Delta Dome was unique in that it would have had natural ventilation from air flowing through a gap between the larger inverted bowl that comprised the Plexiglas roof and the smaller seating bowl below.  The creative design was the product of the big Skidmore Owings Merrill firm that had designed Memorial Coliseum just a few years earlier.

Delta Dome drew heavy support from local politicians, sports enthusiasts and business interests who believed the new stadium would be an economic stimulant.  A sportswriter contended the ballot measures gave Portlanders the choice of being “a Big League City or a Sad Sack Town.”

Voters in May and again in November of 1964 took the sad sack town option, and that was the last we heard of Delta Dome.

Had the dome been erected, there was a strong opinion that Al Davis would have located his AFL football team, the Raiders, in Portland instead of Oakland.  How long he would have remained in Portland is a good question; Davis later moved from Oakland to Los Angeles, then back to Oakland; his son later fled Oakland for Las Vegas.

Further, the domed stadium concept proved unsuccessful elsewhere.  Today the Astrodome is long vacant; Seattle built the Kingdome and later imploded it.  It turned out that stadia built for both football and baseball didn’t provide optimum seating for either sport, and major league cities these days have erected separate venues for the two sports.

With the defeat of Delta Dome, the City of Portland decided to buy Multnomah Stadium from the private Multnomah Athletic Club.  The 1920s-era stadium has been renovated several times since and is now used almost exclusively for professional soccer.    However, its current seating capacity of 25,000 suggests that another significant expansion likely will be in the offing (as Building on History has suggested earlier) if professional soccer continues to grow in popularity.

The Architectural Heritage Center's Unbuilt Portland exhibit (along with other displays) is open Thursdays through Saturdays from 11 a.m. to 5 p.m., at 701 SE Grand Ave.  It might leave you with the realization that sometimes the city is better off with what it doesn’t achieve.

To be snarky about it, one could suggest that visiting Lloyd Center is a good way to get out of the cold, rainy weather and to avoid the crush of holiday shopping crowds.

What once was Portland’s largest and busiest shopping mall lost its last big magnet store two years ago.  Like the past two big shopping seasons, the 1.16-million square foot mall on three levels and lots of parking remains a hollow shell of its former self.  For many years after its opening in 1960, the mall was packed with shopers during the holiday rush.  No more.

Yes, the doors are still open.  Is it worth the trip?

One year ago, a major real estate property development and management firm, Urban Renaissance Group, took control of the 18-square block mall and announced that it planned to keep it as a retail and community center with its skating rink in the middle.

Since then – there has been little word about its future.  Remaining tenants have said they have been told no plans, but have received some directives about staying open during morning hours when few shoppers are present.

The largest remaining stores are Barnes & Noble, Ross Dress for Less and Forever 21, an apparel store appealing to young adults.  Macy’s, the last of several so-called “magnet” stores, pulled out after the 2020 holiday season.  Under the original mall concept, a few major retailers attracted most of the customers and smaller shops filled in the storefronts between them.

There are a few new shops this season, including a magic store and a purveyor of comic books.  Other low-voltage uses have included a film festival that ran for a few days in vacant shops and a roller-skating event in one of the former big stores.

Ironically, the shopping complex that once floated Portland’s retail boat may become the low-rent venue for “creative” new stores, much like run-down neighborhood commercial streets once did.  A key question facing Lloyd Center is whether the new small shops can attract a sustainable customer base without the attraction of large stores.

Security also will be a challenge.  Some retailers at Lloyd Center have expressed concern about security from shoplifters.  A few private security officers stroll around periodically, and the large stores appear to provide their own.

A broader question may involve the patience of the Urban Renaissance Group and its partner, the KKR Real Estate Finance Trust.  These a big-money enterprises and one wonders when they will start considering more lucrative opportunities for the big Northeast Portland urban site.  If they aren’t already….