Good News at (Old) Concordia U. 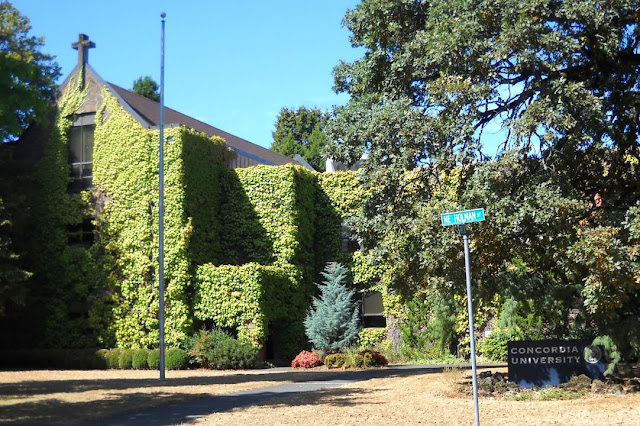 There is good news for a former 24-acre small college campus tucked in the middle of a residential neighborhood in Northeast Portland.  By next summer, students should be taking classes again in what used to be Concordia University.

The campus has been closed for more than two years after the conservative Missouri Synod of the Lutheran Church decided to shut down the 1200-student university ostensibly because of its creation of a center to provide assistance to gay, lesbian, bisexual and transgender students.  (Don’t ask if Jesus approved.)

The future of the campus and its many buildings became a big question mark in the Concordia neighborhood.  The land is zoned as a "campus" under Portlands's land-use laws, which made potential  converstion to some other use difficult and costly to achieve.

Two years ago, Building on History recommended that it be resold to a larger institution – possibly Portland State University – as an adjunct campus.  While our suggestion seemed to go nowhere, the University of Oregon purchased the site earlier this summer for $47 million, according to county records.

The purchase arose from a $425 million donation to the University of Oregon from Connie and Steve Ballmer to create the Ballmer Institute for Children’s Behavioral Health.  (Steve Ballmer is a former CEO of Microsoft.)  The institute will offer bachelor’s degrees and certificates for mid-career professionals upgrading their credentials.

According to information presented to the Concordia Neighborhood Association, the institute hopes to address a national shortage of professionals engaged in mental health programs for children.  As many as 80 percent of American students needed mental health care are unable to get it, according to the institute’s proponents.

The first 200 students are expected to arrive on campus by summer and fall of 2023, along with 20 faculty members.  The university also has left the door open to other programs potentially using parts of the “new” campus.

The sale closes the history books on Concordia, which began in 1905 as a Lutheran-related private high school.  It expanded to a junior college in 1950 and to an accredited four-year university in 1977, dropping the high school along the way. 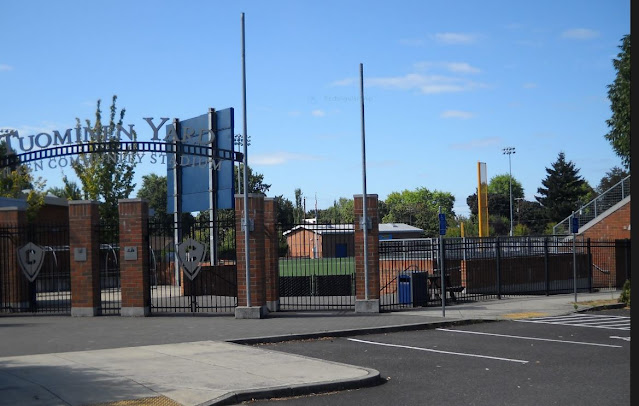 While new ownership is good news for the campus and the neighborhood, it does not answer what happens to the old Concordia athletic facilities.  In the early 2000s, Concordia removed 30 nearby houses it had acquired over many years to build attractive all-weather fields for soccer and baseball.  The university also has tennis courts and a gymnasium in good condition that seats about 1100 for basketball.

All these facilities are in good condition – or at least were when Concordia University closed.  They should not be left idle.  If the University of Oregon doesn’t intend to use them, perhaps it could structure a deal with the Portland Bureau of Parks and Recreation.  Ball fields are at a premium in the neighborhood, and these should be put to good public use.

Back to the Future


Dramatic changes in retail shopping stemming from the pandemic and internet purchasing have given some building owners opportunities to peel off fake frontages and to restore facades to their historic architecture.

A notable example is at 716 SE Grand Ave., where a fake façade from the former Khanate Imports furniture store was unbolted and carted away by new owners in 2018.  The speedy demolition revealed the interesting original brick storefront that dates to 1903.   The purchaser in 2018 was a limited liability company affiliated with Lorentz Bruun Construction, which undertook the restoration.

Despite the encouraging restoration, the building sat vacant for three years.  The pandemic has pushed more shoppers to the internet and led to increased retail vacancies on Portland’s commercially-oriented streets.

The delay notwithstanding, this story likely will have a happy ending.  The building was purchased earlier this year by Literary Arts Inc., a nonprofit enterprise that uses several ways to engage readers and support authors.  The entity is best known for hosting the Portland Book Festival and the Portland Arts and Lectures series.

Documents filed with the City of Portland indicate that Literary Arts intends to renovate the interior ng for offices and space for events.  The new activity will be a welcome plus for this block of SE Grand Avenue, which is part of the East Portland/Grand Avenue Historic District.

The façade’s restoration included reintroduction of the clerestory windows, located above the ground-floor windows on the heightened first floor.  These windows were intended to allow more natural light into interiors which were poorly served by electrical illumination of the era.

Two and three-story buildings having storefronts on the ground level and offices or residences above were highly common edifices in the first two decades of the 20th Century. They were especially popular on commercial streets like SE Grand that bore streetcar lines carrying most local commuters before the automobile achieved mass popularity. 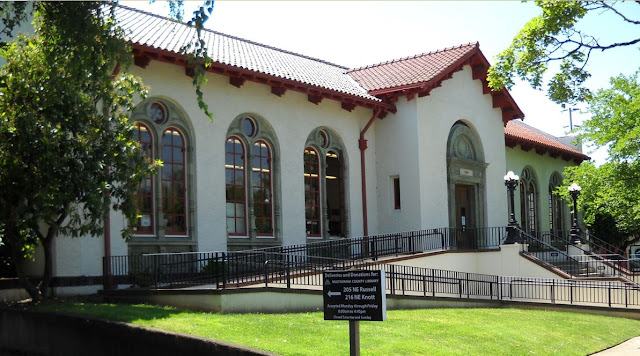 Good news appears to be in the offing for one of Northeast Portland’s most attractive landmark buildings, the  Multnomah County Library's Albina branch located at 216 NE Knott Street.

A renovation plan nearing a final proposal would restore the interior of the Spanish Renaissance-style building to make it the children’s reading room connecting to a proposed larger, two-story new library building facing one block to the south on NE Russell.

The historic Albina branch was built in 1912, under the design of a young architect, Ellis Lawrence, who went on to have an impressive career both in academia and private practice. It was one of seven branch libraries funded in the early 20th Century by steel magnate Andrew Carnegie.

For a time, it sat in the heart of Portland’s Black community, that later was sundered by the Interstate-5 freeway and the unsuccessful Emanuel Hospital urban renewal project.  “This is what the community remembers,” said Chandra Robinson, an architect for LEVER Architecture who is working on the renovation and expansion plan.  “They’d like to see their grandkids have the same experience" in the old library.

Given all the neighborhood changes, the Albina branch was moved to the first of five subsequent locations in the mid-1950s.  In 1954, the interior of the historic building was serious impaired by closing in arched portals in the main room.  Those portals will be reopened under the renovation plan.

The building “has some beautiful detailing,” Robinson told the Portland Historic Landmarks Commission recently.  Robinson’s firm is expected to return with a final proposed library plan in upcoming weeks.

The Carnegie-funded building served as a library until 1960, when the branch was first moved to other locations.  The historic building was returned to library service a year ago, but has been hampered somewhat by COVID-19 restrictions.

As it stands now, the new building facing on Russell would have two stories, and would be connected to the historic building by a hallway allowing direct access between the old and new buildings.  Because of a change of grade in the block between Russell and Knott, the new “taller” building would hardly be visible behind the historic entrance on Knott.

Though Ellis Lawrence’s firm designed more than 500 buildings during his 40-year career in Portland, the Albina branch was his only library building.  He also was founder of the University of Oregon’s School of Architecture and Allied Arts, and served as its dean from 1914 to 1946, commuting on a regular basis between Portland and Eugene by train.

The original attractive plaster ceiling and much of the woodwork details remain in the Albina branch, and presumably will be incorporated into the restoration.  One would hope the plan will include replacement of the standard fluorescent lights with something stylistically closer to the originals.  According to a construction schedule, the new building and renovation of the historic structure should be finished late in 2024. 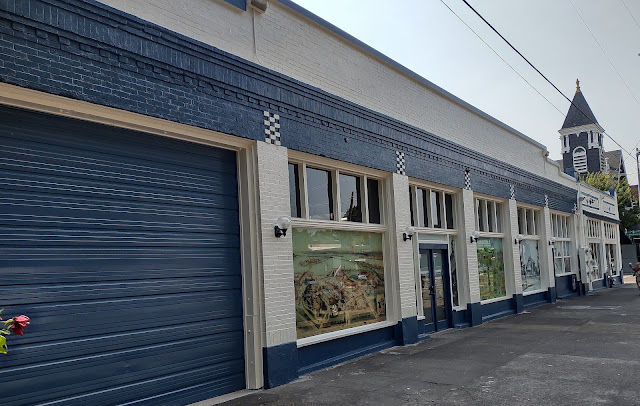 An eyeball scan along any Portland neighborhood commercial street shows the dreadful impact of the pandemic and internet shopping.  Many stores that sold merchandise are gone.  The ones that remain offer services not available online – cannabis, haircuts, tattoos, massages and toenail and fingernail renovation.

Vacancies offer new opportunities.  An unusual one is occurring on NE 24th Avenue where a longstanding limousine tenant has been replaced by what can best be called a high-end man cave.

An affluent (presumably) car collector hired designer/contractor John McCulloch to renovate the indoor space.  Over half of the old limousine area will be devoted to the owner’s car collection.  The rest contains computerized bicycle-racing exercise machines, a sauna, showers and a wet bar.

The renovations do not physically affect five storefronts facing Broadway that are part of the same building.  The single-story commercial building dates to 1913; the identity of the architect is not known today.

McCulloch faced at least two interesting design challenges.  One was what to do with large picture windows that once allowed substantial views into the formerly retail space. McCulloch answered that challenge with some large historical photographs showing other buildings in the neighborhood, plus a large blow-up drawing of the 1905 Lewis & Clark Centennial Exposition. 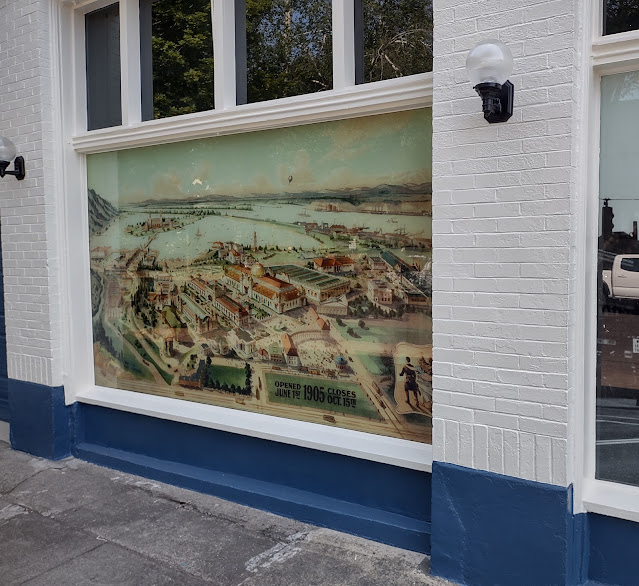 Another large window contains a sketch of numerous old Portland houses and buildings.  What they have in common – and you will know this only because you read it here – is that they are all structures that McCulloch has renovated during his active career. 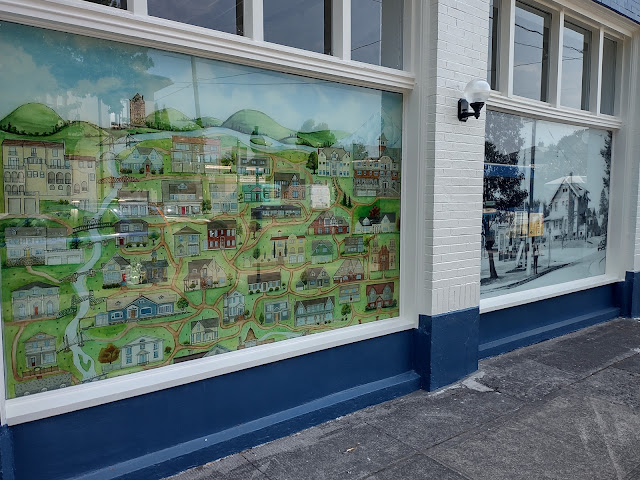 All told, the solution to the windows problem gives pedestrians interesting things to look at that related to Portland history, neighborhood history and architecture.  One could imagine that the images could be swapped for others over time, but perhaps that is too big of an “ask.”

Another challenge to be faced is the threat of graffiti taggers.  This building, like many others in seemingly all of Portland’s neighborhood business districts, has not been immune.  McCulloch has added several attractive sconces at the clerestory level.  Lighting is a deterrent to taggers who prefer not to be seen.

In the architectural preservation world, finding new uses for vintage buildings is one element that savesthem from potential demolition.  This case offers an interesting – if unusual  – example. The result is definite visual improvement over the building's former appearance, below. 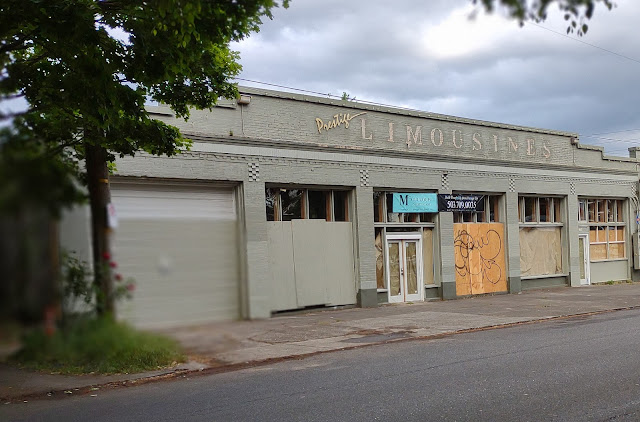