End of the Burnside Bridge? 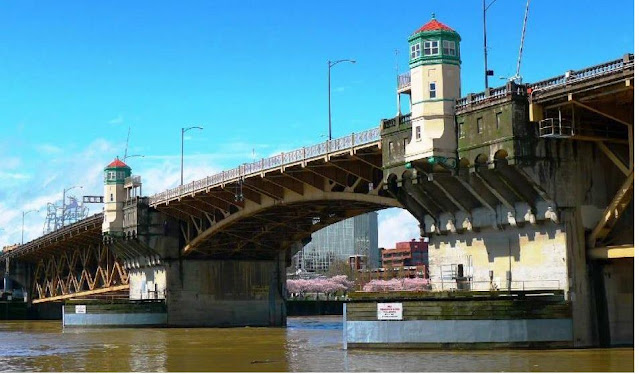 When the inevitable Cascadian subduction zone earthquake -- the Big One -- hits Portland someday, engineers say 40 of the 44 bridge lanes that connect the east and west sides of the Willamette River will collapse or be unusable for the near future.

And while two lanes of the Sellwood Bridge are expected to survive the quake, landslides on Highway 43 south of Portland may prevent vehicles from entering or leaving the West Side.  Tillikum Crossing’s two lanes were never intended for auto or truck traffic.

Thus the Burnside Bridge has been designated to be the “east-west lifeline route,” and Multnomah County has been planning for a couple years on how to prepare that bridge for a major quake.  If you want to see a scary video simulating a collapse in a major quake, click here:

The tentative conclusion is to build a “long-span” replacement bridge that would extend from West 2nd Avenue across the river to Martin Luther King Jr. Boulevard. The estimated cost is $825 million for a project to be completed in the late 2020s.

In short, the Burnside Bridge that has served since 1926 with its twin bascules would be toast.

Or would it?  John Czarnecki, a preservation-oriented architect and former chair of the Portland Landmarks Commission, contends that another option, enhancing the current Burnside Bridge, was dismissed prematurely.

During an informational meeting before the Portland Design Commission in December, Czarnecki called the bridge one of the city’s “best celebrated public works,” deserving of appreciation and preservation.  “There is a simplicity and modesty of this bridge that will be lost.”  He added, “Please, let’s take a careful look at what we’re losing…and what we have the opportunity to maintain.”

Designing a bridge to run through the heart of a major city is a complicated task.  Designers and engineers are concerned about obstruction of city views, accessibility under the west end of the bridge, maintaining a safe crossing above the I-5 freeway and the Union Pacific Railroad tracks on the east side.

“There is a whole smattering of different options we are looking at,” said Steve Drahota, a consultant with the HDR engineering and planning firm that is part of the county’s planning team.

The long-span proposal that is the leading option so far would move structural elements above the roadway, as opposed to the structure that now sits below the Burnside deck.  How bulky and how the structure is shaped will affect the views of the city by passengers travelling either direction.

The two primary structural types are tied arches that look like small versions of the Fremont Bridge, and a cable-stayed structure that would be a larger version of Tillicum Crossing.  Advantages of these long-span options include reduced structural elements in Waterfront Park and completely spanning the squishy ground that historically was a marshland on the river’s east bank.  The long-span approach also would protect the Interstate-5 freeway and Union Pacific’s railroad tracks.

Since the bridge must continue to accommodate river traffic, it needs to be provided with a center lift span or a version of the current bascules that lift the movable sections by use of counterweights below the bridge deck.  The center lift system would require two bulky towers near the river’s center, substantially adding to the visual clutter.

Czarnecki believes not enough attention was given to enhancing the current bridge.  While such an enhancement is predicted to cost 8 to 10 percent than a new long-span bridge, he believes the potential long-term benefits, including the historic design of the current bridge, are worth it over the long run.

Enhancing the current bridge presents its own problems, however.  Additional supports would be needed on both ends, presenting more obstacles in Waterfront Park on the west and eliminating the skateboard park on the east.  The squishy ground on the east bank, which amplifies ground movement in earthquakes, conceivably could leave even the enhanced bridge subject to serious damage.

A potentially new option raised in the Design Commission hearing would be retrofitting and saving the existing bascules and historic appearance while adding long-span designs on the east and west ends.  If feasible, however, this option might preclude the possibility of widening the entire bridge by 20 feet, as currently envisioned in the long-span approach.

The Design Commission expects to hear an update on potential bridge designs in the next couple months.  More information on the project is available at: