Eaton Building: In Jeopardy, or Not? 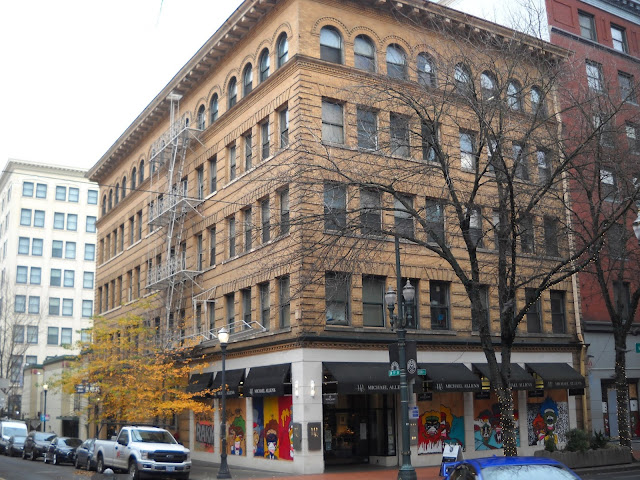 To her credit, Vanessa Sturgeon, the president of TMT Development, wasn’t obligated to attend a meeting of the Downtown Neighborhood Association board to explain why she is seeking removal of the 115-year old Eaton Building from Portland’s historic inventory list.

Her reason was a good bit puzzling.

The Eaton, at 622 SW 9th Ave., was built as a hotel to serve guests attending the 1905 Lewis & Clark Centennial Exposition.  The interesting brick structure contained 70 rooms, including 16 suits including bathrooms.  Many years later, the building was converted to the 22 apartments it contains today.

In 1984, the City of Portland included the Eaton on the historic inventory, a list of scores of buildings throughout the city that were regarded for their historic value in Portland and their worthiness to be designated as city landmarks or placed on the National Register of Historic Places.  While the Eaton was deemed worthy for either designation, no such designation was ever sought.

Now Sturgeon is using a city code provision that allows removal from the inventory after a notice period of 120 days.  Removal is automatic; there is no opportunity for objection or a public hearing.

So, DNA members were curious to ask why.  Sturgeon’s answers were puzzling, at best.  She called the inventory “a made-up list” that imposed restrictions without any benefits.  Asked what those restrictions were, she replied, “I don’t even know what the restrictions are.”  Moments later, she added, “It would be expensive for me to have a lawyer come and explain it all.”

In fact, there are no restrictions on buildings included in the inventory. (We will get to the likely motive shortly.)

In the meantime, Sturgeon assured the DNA that she has no intentions of selling or demolishing the Eaton.  She said the apartments are being upgraded one at a time as tenants move over.  “They are really nice apartments,” she said. Sturgeon said she has no interest in placing the building on the National Register, although such a listing could offer tax benefits.

John Czarnecki, an architect and DNA member, said “This would be a real shame to remove this building.  The brickwork is fabulous.”  He said he liked the scale of the Eaton on the street.  “It is an exceptional building.” The image below shows the romanesque arches on the top floor, the brick quoins on the corner and the subtle but elegant window decorations on the lower floors.

Czarnecki said the Eaton was designed by Henry J. Hefty, an architect who practiced in Portland from 1884 to 1912.  Hefty’s most notable building was the First Congregational Church erected in 1890.  Its over-sized bell tower made it visible from almost anywhere west of the Willamette River for decades.

In 1890, Hefty won a design competition to design Portland's City Hall.  His plan was a large, heavy building that was eventually deemed to expensive to complete.  Whidden & Lewis designed a smaller building finished in 1895 that sits on foundations prepared for Hefty's work.

Sturgeon predicted that major property owners with buildings listed on the historic inventory will be asking to have those structures removed from the list.  In the Eaton case, “This has nothing to do with demolition,” she said.  “We have no intention of selling the building.” 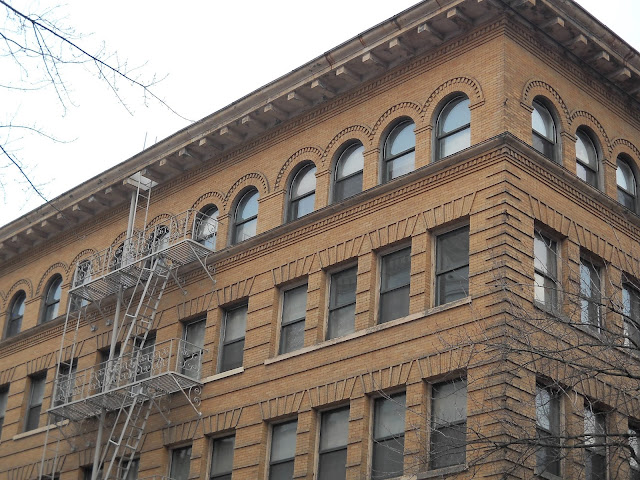 The likely motive for delisting requests from Sturgeon and other owners likely lies in proposed city code changes pending before the Portland Planning and Sustainability Commission in advance of City Council consideration sometime next year.

Under the proposed new rules, removal from the historic inventory could not happen unless it was accompanied by a demolition permit application.  The demolition application would require a 120-day period in which interested parties could try to buy the building to spare it from demolition or try to make plans for moving the historic building to a new site.

By removing a building from the historic inventory now, a person planning to demolish a building ostensibly would eliminate the 120-delay.  Not being on the inventory presumably would make it easier to sell a building, especially if a developer is accumulating more than one contiguous property in hopes of building something much larger.

Though Sturgeon repeated that she has no plans to sell or demolish the Eaton, Story Swett, an architect and preservation advocate, called removal from the historic inventory “a first step down the road.”  He added, “It’s dismaying and disappointing to have this happen.”