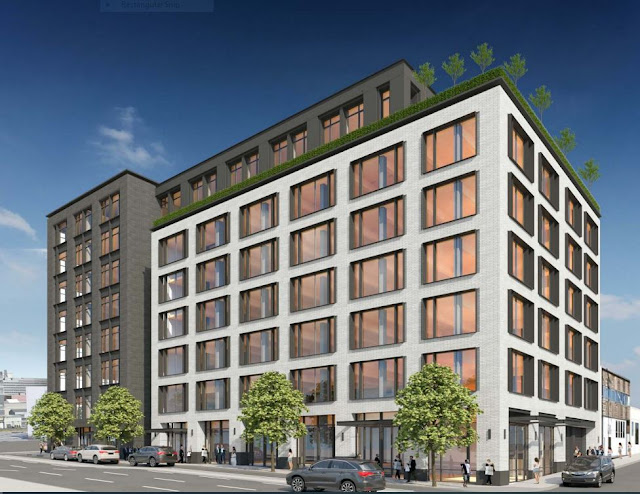 Robert Thompson is one of the lions in Portland’s contemporary architecture world.  As a founding partner and principal of TVA Architects, he leads a large firm with a long history of designing sleek, modern buildings with lots of glass and metal finishes.

In Portland, his firm did the Fox Tower (27n stories), Park Avenue West (30 stories)  and the John Ross condominium (32 stories).  In Beaverton, TVA designed the Nike World Headquarters.  In Eugene, the Matthew Knight Arena.  You get the idea. Big, new, fancy stuff.

An outsider never knows who all contributes to a large firm’s designs, but when it comes to dealing with public agencies, Thompson is the firm's speaker.  His presentations are direct, focused, professional, polite and delivered with consistent modulated enthusiasm.

A bystander was curious to see how Thompson and TVA would react to an unusual project for the firm as it went about preparing plans for an eight-story, half-block building that will replace a parking lot in the East Portland-Grand Avenue National Historic District.  It is a little-known, narrow district running along the Grand Avenue spine where contributing buildings date from 1883 to 1930.

TVA’s assignment was to design a building that would fit into the context of its historic neighbors without giving the impression of mimicking something "old."  The developer-client is a firm headed by Vanessa Sturgeon, who was involved in the Fox Tower and Park Avenue West projects designed by TVA. Sturgeon's presence suggests new investment interest in what has been a sleepy neighborhood for many years.

We may begin seeing the results soon.  Sturgeon told the Portland Historic Landmarks Commission that the project is “fully funded and ready to break ground.”  The Flatworks Building will sit on the east side of Grand Avenue between S.E. Ash and Pine Streets at the northern edge of the district.

The simplest part of the building’s design is its structure.  Structural elements and floors will be composed of cross-laminated timber, a relatively recent engineered wood product fabricated by laminating wood layers at 90-degree angles.  At eight stories, Flatworks would rank among the tallest to use the new structural technique in Portland.

Developing the building’s exterior envelope was not so simple.  To their credit, Thompson and his team studied almost all of the nearby historic buildings to look for design cues.  In a series of meetings with the Landmarks Commission, Thompson showed seven or eight potential versions for the new building.  “We are not trying to design a building that leaps out at you,” he said.  “We want it to blend into the district.”

The biggest design choice was to take the full-block façade facing Grand Avenue and make it look like two buildings rather than one.  A recessed main entry to the office building separates the two “sections.”  The distinction is important because only one other historic building in the district had a  a 200-foot frontage.

The norther portion of Flatworks at eight stories will be faced in a dark grey brick while bricks on the six story side will be cream-colored.   Two recessed stories on the six-story side will give the appearances of being a penthouse.  Recessed bays at the ground level will be available for retail uses.

Thompson said the cross-laminated timbers will be visible at night when the building is lit.  Recessed spandrels accentuate windows in the darker portion of the building, while metallic shrouds around the windows of the lighter building portion will extend several inches beyond the brick columns. The shrouds “will create a lot of texture and shadows when you come up Grand Avenue,” Thompson said. 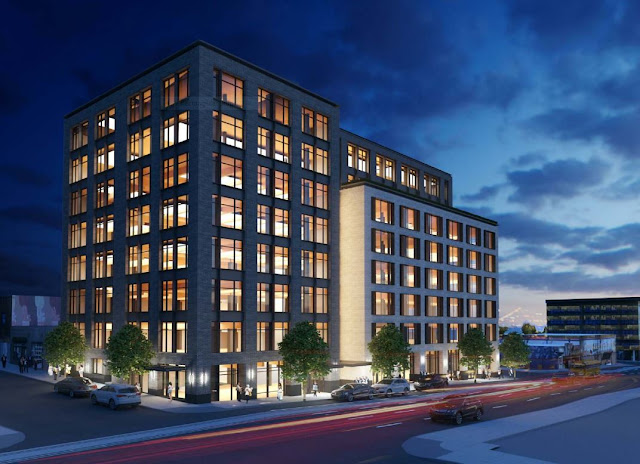 Thompson’s presentations were professional and direct, as usual.  Perhaps the only glitches occurred when he referred to the district’s high-rise Weatherly Building a couple times as the Waverly (as in Waverly County Club). A minor slip, if you will.

Members of the landmarks commission thanked him for his flexibility.  "We asked for some real changes and we've seen some real changes," said Kristen Minor, commission chair.  Anne Mahoney, an architect who sits on the commission, said the result “strikes the right balance between respecting the historic district and a restrained contemporary attitude.”

If Thompson was fatigued by the sequence of commission meetings, he didn’t show it.  “Thank you so much for the process,” he told the commission and the city staff.  “It has been a delight. I'm looking forward to construction."