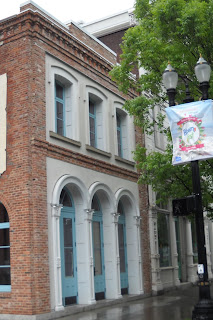 This story is so good, it deserves being told again and again.

Never in Portland, I believe, has so much research, time, energy and thoughtful care been invested in restoring the façade of a historic building that is only 25 feet wide.

It is historic because the Hallock & McMillan building at 237 SW Naito Parkway, is the oldest building surviving downtown.  Built in 1857, it was one of the first to use brick construction and cast-iron elements on its eastern façade.  Absalom Hallock was the city’s first professional architect.  “The classical details of the columns and their applied ornaments provide the first public artwork appearing on Portland’s streets,” says architectural historian and local cast iron expert, William J. Hawkins III.

Over the next 35 years, Portland developed one of the largest inventories of cast-iron buildings in the nation, though many of them subsequently were demolished.  Many grew larger and more ornate in decoration.  The neighboring Fechheimer & White building from from 1885 is an elegant example.

The historic façade of Hallock & McMillan was scraped off in the late 1940s to be replaced with something more “modern” and vapid.  Owner John W. Russell, who also owns two other historic buildings on the block, committed himself to restoring the original appearance.  Overall, the project took eight years to achieve completion last fall.

The video here explains the process.  I  believe you will enjoy a few minutes looking at it.

Besides Russell, you will notice several key players in contemporary preservation work in the video.    They are Hawkins, architectural historian; Brian Emerick, an architect involved in many restoration/preservation projects; Bremik Construction Inc., a firm involved in many tasteful vintage building renovations; and Dave Talbot, who doesn't have speaking part in the video, is an expert at reproducing architectural details. If we care about our city and its history, we must appreciate the efforts to restore and preserve these early pieces of downtown.
.

The video does not detail another vital phase of renovation.  Engineers found ways to brace together three historic buildings on the same block (including the Dielschneider building facing on Oak Street)  to achieve greater strength against earthquakes.  Pioneer that he was, Absalom Hallock never had to worry about earthquakes.
There is another interesting historical detail about the neighboring Hallock and Fechheimer buildings.  When pioneers platted the first streets of downtown Portland, they established lots with 25-foot frontages.  Their goal assumed the small size would be helpful in marketing.   Given blocks of 200 feet by 200 feet, that meant 16, 25 by 100 foot lots in each bock.  There are few 25-foot lots left today  because over the decades owners succeeded in aggregating neighboring lots so larger buildings could be erected.   If you go to see these two buildings to admire their cast iron architecture, take a moment to appreciate the scale of Portland's earliest development.
at May 13, 2020