There are no pretty pictures to display in this posting.  Instead, we look at a Portland planning policy about new building heights that poses serious risks to the city’s historic districts. 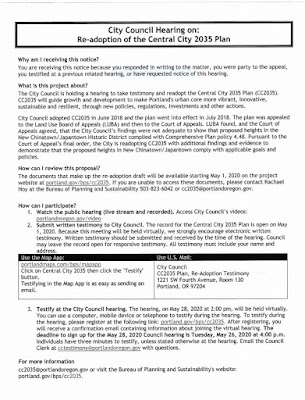 Some background:  City planners, developers the Planning & Sustainability Commission and the City Council have negotiated and argued for at least a decade about setting appropriate height limits for new buildings in the Chinatown-Japantown Historic district in inner Northwest Portland.

Decades ago, height limits were set as high as 450 feet in a district where most historic structures are two and three stories.  After detailed hearings and study sessions, the Planning Commission later suggested 125 feet, enough for a 10 story building.  In 2018, the City Council finally adopted limits of 200 feet, which could amount to 17 or 18 stories.

Restore Oregon and other preservation organizations appealed over the 200 foot limit, contending that the City Council failed to comply with a  Portland Comprehensive Plan requirement of justifying development “while preserving and complementing historic resources.”  The Oregon Court of Appeals ruled that the city had failed to meet that standard.

The legal fix is easy enough, right?  Come back and ask the City Council to come up with some kind of verbiage about “preserving and complementing historic resources.”   In nice bureaucratic happy-talk, the hearing notice says the city’s action “will guide growth and development to make Portland’s urban core more vibrant, innovative sustainable and resilient, through new policies, regulations, investments and other actions.”  No mention of historic significance, of course.

The council plans to hold an electronic public hearing on May 28.  Citizens may submit written testimony in advance.  (See details at the end.)

The planning staff has offered a bundle of assorted reports dating back a couple decades from which it presumably will craft some sort of justification.  The chances of the council changing its mind and lowering the limits likely are nil.  In the view of Peggy Moretti, executive director of Restore Oregon,  125 feet would be an acceptable maximum, but not in all locations depending on the neighborhood context.

At the May 28 hearing, “I still think it’s important for people to raise their voices,” even if the cause is futile, Moretti says.  “At the same time, we need to find ways to mitigate the impact of this.”

Under this scheme, the Portland Landmarks Commission would rule on whether a proposed building preserves and complements historic resources.  A developer dissatisfied with a commission ruling could appeal to the City Council.  Historically, appeals from landmarks commission decisions have been rare.

Moretti sees another downside if the 200-foot heights are allowed by right:  Intentional deterioration by neglect.  Owners might envision greater revenue by letting old buildings decay so they become more eligible for removal and replacement by larger structures.  “We really need to go after that,” she said.  “Heights inspire demolition by neglect.”

If you are interested in the Oregon Court of Appeals decision (and finding out why you are glad you don’t practice law), click here:
https://law.justia.com/cases/oregon/court-of-appeals/2020/a172000.html