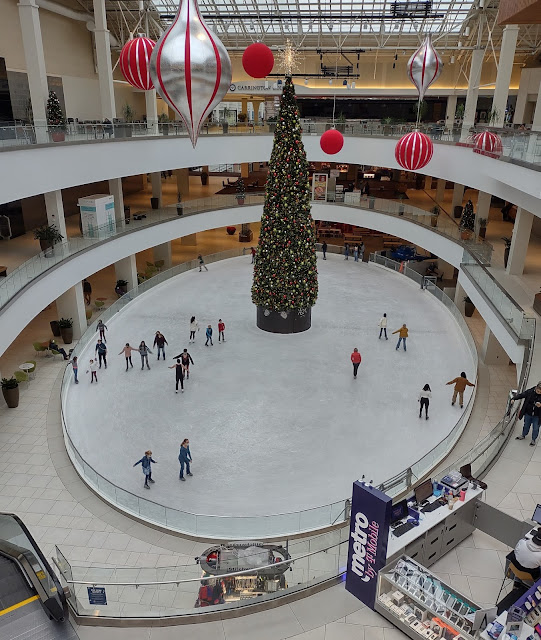 If you’re a fan of oversized fake Christmas trees and huge dangling ornaments, don’t miss Lloyd Center this season.  It’s bound to be your last chance.

A year ago, Building on History wrote about the obvious decline of the big Northeast Portland shopping mall and offered suggestions for its future.  Other news outlets picked up on the story, leading to an outpouring of memories of shoppers who remember the mall in its prime.  While this blog generally concentrates on preservation of older buildings, the number of "hits" for the Lloyd Center post far exceeded any other in the blog's lifetime.

Portland author and filmmaker, Paula Bernstein, was so touched by peoples’ memories of the mall that she is working on documentary about them.  Her production schedule is not yet known, but there is a strong chance the mall will be padlocked before it’s finished.  Interested people can reach her through https://www.paulabernstein.com/

In the meantime, the months have been difficult at the mall.  None of us knew a year ago that the Texas-based owners were already defaulting on their big debt to a powerful lender, who has now promised  foreclosure after the December seasonal “rush” concludes.

A fire in the electrical station shut down the mall for a few weeks in the summer, and more stores have departed.  Managers of those that remain have heard nothing from the mall owner about the mall’s future.

KKR Real Estate Finance Trust said it plans to take possession “and prepare for long-term redevelopment of the site.”  What that means is anyone’s guess.

The only obvious answer is that the mall’s future, like most other issues on American society, will be decided by Big Money.  You can be sure KKR isn’t interested in housing the homeless or maintaining a goofy little skating rink because a handful of people like it.  It also is improbable to think the mall could be reconditioned as a retail site, given the decline in on-site shopping in favor of the internet.

The likelihood is that the mall will be replaced by towers for offices and affluent condominium owners, if private studies show there is suitable market for them.  Lloyd Center was an anomaly in the city's traditional grid layout in that it was a "superblock" imposed in the late 1950s on approximately 17 square blocks of "old" Northeast Portland.  It would be interesting to see streets blocked off by the mall be reopened to Portland’s traditional grid pattern.  That outcome might open the door for interesting and active street life in the neighborhood.  Or not.

In the meantime, take in the fake tree and monstrous dangling ornaments if they fit your fancy.  While you can.