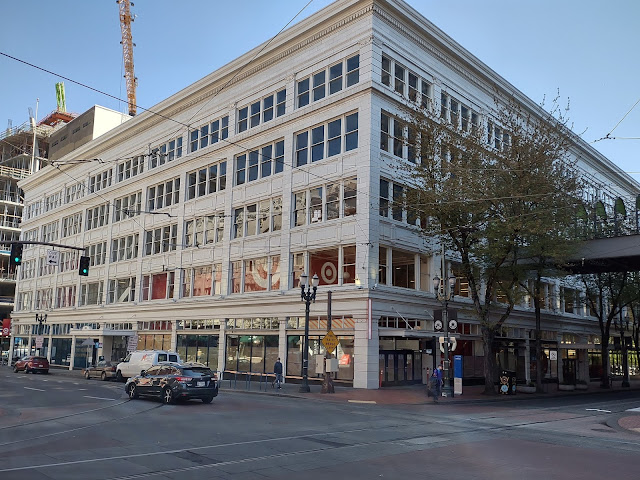 Perhaps the best hope for an excellent vintage building is that it can have as many lives as the proverbial cat.

Of course, our subject here is the five-story full-block steel-framed, terra-cotta coated building that has stood on S.W. 10th Avenue since 1910, when its six hydraulic-powered elevators and big skylight were the talk of the town.  The Olds, Wortman & King store is significant historically because it marked a westernmost expansion for a major retailer downtown.

In the latest iteration, Target has abandoned the second and third floors of the building and now operate a smaller store on the first floor with an entrance on S.W. Morrison Street.  The four floors above will be rented for offices.  One floor will become the new home of SERA Architects, a firm with an excellent track record of renovating historic buildings.

The smaller Target on the main floor is actually a plus for pedestrians and shoppers.  Under the earlier version, shoppers entered on Morrison and rode escalators to the floors above.  Now the majority of the Morrison frontage is well-lit, with large windows literally glowing with retail items for sale.

The former department store is best remembered these days as the Galleria, created in 1976 after Bill and Sam Naito bought the empty shell left by the departure of Rhodes in 1974.  Working with a predecessor of the SERA firm headed by the late George (Bing) Sheldon, they reopened the skylight that had been closed off and created spaces for restaurants and boutique shops on the first three floors.

The Naitos also converted the basement for parking and put offices on the top two floors.  For several years the Galleria thrived as a trendy shopping venue, holding as many as 48 shops and eateries.  The glory years subsequently ended with the opening of the Pioneer Place mall in 1990, the death of Bill Naito in 1996 and a long-running feud involving members of the surviving Naito families.

Western Culinary Institute, a cooking school, used the building for several years including a main-floor restaurant before shutting down.  Target came to the rescue in 2013 and the building’s owners took steps to recapture some of the building’s historic features.

Under the building’s revised plan, the second through fifth floors will become offices.  The building’s major entrance on S.W. 10th Avenue is now locked shut, but presumably will lead to elevators travelling to and from the offices.  Regrettably, the large atrium that was closed off after the glory days of the Galleria apparently will remain closed.

While the new Target will be smaller than the old one, it offers the most vibrant main-floor shopping experience since Galleria.  It makes Morrison Street a more attractive retail environment for the vacant retail spaces directly across the street on the ground-floor of a renovated multi-level parking structure.

The original building, largely intact on the exterior, was designed by a Seattle architect, Charles Aldrich.  A.E. Doyle, on his way to becoming one of the most important architects in Portland history, managed the project and designed the interiors.

Aldrich’s design scheme to some degree is an offshoot of Louis Sullivan’s famous Carson Pirie Scott department store, opened in Chicago in 1899.  Sullivan used a steel frame that allowed large windows to flood the floors with natural light.  Sullivan’s work was a new concept for creating a merchandise palace with a contemporary rather than historic style.

Within the same few years as the Olds Wortman & King building, Doyle was using the same basic concepts in his designs for the Meier & Frank and Lipmann & Wolfe department stores.   Both of those buildings have graduated to other uses, as well.

There is now way to predict how long the newest “chapter” of the Olds & King building will last.  One would assume, however, given its excellent location, good bones and flexible interior space, that, in necessary, it should be eligible for further “begats” in the years ahead.