Brewing a Great Save 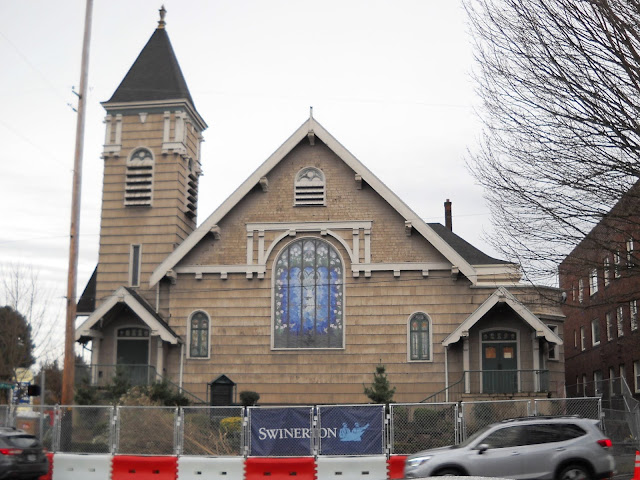 For several months, it seemed that a 111-year old Craftsman-era church in Northeast Portland was headed for demolition and replacement by a five-story housing project.

But then two men wanting to build a small brewery learned about the potential sale of Metropolitan Community Church at 2400 N.E. Broadway and jumped in to change the outcome.  “Dustin (Harder) and I are really passionate about preserving historic places and we are really excited to bring this project to life,” said Brody Day, Harder’s partner.

The church has stood as a sentinel perched above the bush intersection of Northeast 24th and Broadway since 1909.  It was built with the best native materials of the time – old-growth fir timber and cedar shakes.  Large bracketed gables dominate the prime west and northern facades

Construction fences protect two sides of the building these days as work gets started on Steeplejack Brewery.  It will bring dramatic new life to the steepled church that housed four different congregations between its opening in 1909 and the departure of Metropolitan Community Church in 2019.

Finding new uses for vintage buildings that have outlived their original purposes pose great challenges for preservationists.  Yet churches offer interesting possibilities as houses, music venues -- and even as a  brewery.

When ready for its first customers, presumably sometime next summer, the Steeplejack building will look virtually identical on the exterior, except for a new paint job and Plexiglas covers to protect the stained-glass windows.

Although never designated as a city or federal landmark, the church is included on Portland’s historical inventory list.  Harden and Day had to work through the city’s design review process to change the building’s function from an assembly space (church) to a brewery.  “They didn’t want us to change the outside of the building,” Day said.  “That wasn’t a problem.  We didn’t intend to, anyway.”

Accommodating vintage buildings to meet modern accessibility requirements often is a challenge.  Day said they were fortunate that the Metropolitan Community Church, which owned the building from 1977 to 2019, added a lift on the Broadway side and remodeled bathroom access in the 1990s.

The interior of the church remained largely unchanged from its original days.  Large wooden trusses leave the ceiling open.  Day said wood salvaged from pews will be used to make tables and seating.  Plans call for the interior of the steeple to be opened to view so people can see the craftsmanship involved in its construction with old-growth timber. 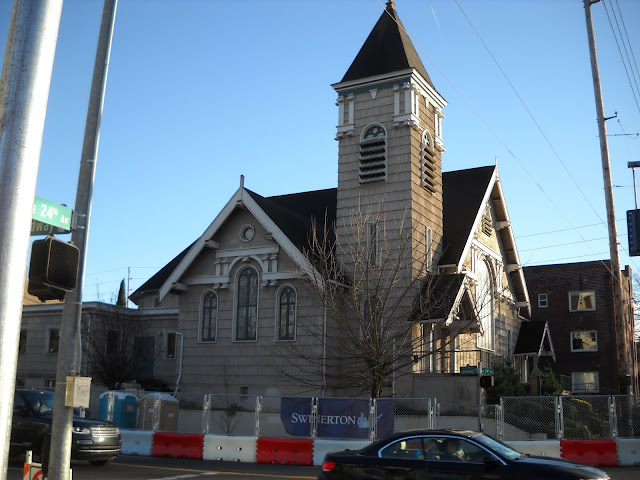 The Steeplejack Brewery moniker comes from the traditional name of the worker -- steeplejack -- who built or repaired steeples or smokestacks at dangerous heights.

Harder and Day, who first became interested in beer as students studying overseas in the 1980s, originally thought of trying to find inexpensive warehouse space for a brewery.  Then they learned that the 1909 church was for sale.  The church was negotiating with a housing developer when the prospective brewers arrived.  Day said the fact that they would keep and preserve the building was important to the Metropolitan Community Church as sellers.

While original construction was underway in October, 1909, President William H. Taft visited Portland and showed up to lay the cornerstone for what was to become the new First Universal Life Church of Good Tidings.

Taft himself was a Unitarian, but during his presidency he engaged in cornerstone ceremonies for Catholic, Protestant and Jewish institutions.  An estimated 20,000 people swarmed into the Irvington neighborhood to see him, according to the Oregon Journal newspaper, with people peering from trees, rooftops and crammed streets. Taft told the crowd that he believed in separation of church and state, but he said religion and moral uplift were vital to improving society.

In more than a century, the church also was home to Grace English Lutheran Church, First Church of Divine Science and finally, Metropolitan Community Church.

The Steeplejack project comes at a difficult time for eating and drinking establishments.  COVID-19 has crippled many restaurants, and what may have been a surfeit of craft brewers has led to the closure of some breweries.

Day said Steeplejack will sell its own beers, in addition to providing taps from other Oregon and Washington brewers.  “The dining and beer culture in Portland has been a really special thing,” he said.  "It's still a vibrant culture."  Even with recent losses, Day and Harder have faith in the region's beer-making and drinking capacity.

One hopes that an interesting building, tastefully restored and adapted to its new use, will be a helpful attraction.