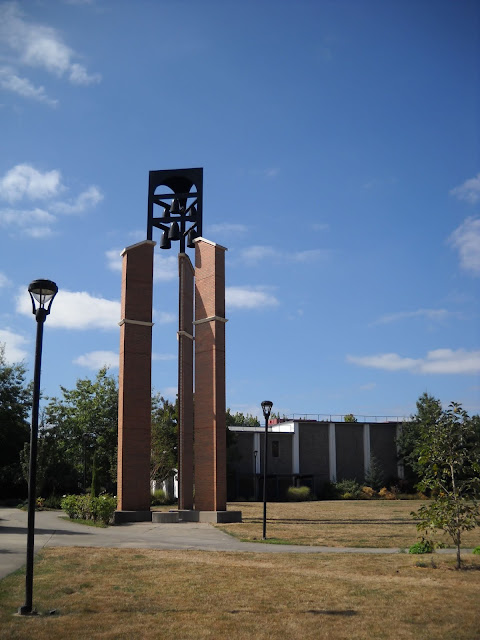 The Sept. 27 article about the vacant Concordia University campus attracted one of the highest volumes of readers in the modest history of this blog.  Many people said they’d like to see the campus used for emergency housing, low-income housing or a combination of low-income and market-rate housing.

Given land-use zoning issues, the quickest path for the 24-acre campus would be to remain as an institutional campus.  Wayfinding Academy, alternative two-year college in North Portland, has expressed interest in acquiring some but not all of the Concordia buildings.  That option appears tenuous, at best, given the hardships of carving up the resource.

Nick Bertram, a friend of mine who graduated from Concordia High School before the institution advanced to the collegiate level, offered another interesting idea.  He believes Portland State University should acquire it to add housing and classroom space for PSU students.

Taking over the whole campus also would give PSU a genuine home field for its women’s soccer and softball programs and men’s and women’s tennis teams.  A PSU graduate, Bertram thinks the university could simply move an academic program of an appropriate size to the Concordia academic buildings.

Public acquisition of a former private college is not unprecedented in Portland.  Cascade College closed its North Portland campus in 1969, unable to pay mortgages it owed on new buildings.  The campus, with the help of tax funding over many years, has morphed into the attractive Portland Community College Cascade campus.

Since this blog concentrates on the value of historic buildings, the comments of Paul Falsetto, an architect who frequently visited the Concordia campus, are relevant:

“Years ago I was researching university alumni centers, and one factoid stayed with me. After conducting scores of interviews with college graduates, it was determined that three elements have the most important influences on graduates’ memories: the people they met, the buildings they inhabited, and the open space that defined the campus.

“Seems to me that with the movement towards online education, both as a business model and as a pandemic response, today’s students will miss out on all three. I’m hoping that our region’s higher education institutions are able to tread wisely during this time of challenge, and retain what they do and where they do it. An active campus grows roots that run deep in the experiences and memories of alumni and neighbors alike.”

Those of us who attended attractive campuses where we lived and went to school would agree. 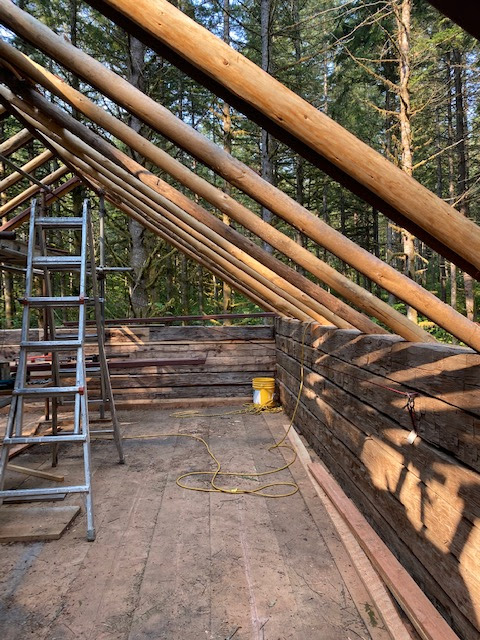 Fortunately, recent major forest fires in Clackamas County did not threaten the Molalla Log House, the venerable building that may be among the oldest in Oregon, undergoing restoration in the Hopkins Experimental Forest north of Mulino.

The history of this interesting structure was related in an Aug. 12 article on this blog.  Hand-hewn timbers that were rescued years ago from another location are believe to be from 140 to more than 200 years old, depending on which analysis one chooses to accept.

While all the timbers fit together tightly without need for metal fasteners, modern building codes would not allow reconstruction of the roof without steel support.  Pamela Hayden, who has dedicated many years to saving and reconstructing the log building, said there was no choice other than adding steel supports so the building eventually can be used for tours and meetings.

“We will have a seismically safe building,” Hayden says.  “The irony is that in the recent fires the only thing that remains in severely burned wooden buildings are their steel components - sadly stark in the embers.”

Research suggests that the building has had several roofs during its lengthy life.  The exact nature of the original one is not known.  Gregg Olson, a craftsman and scholar of historic woodworking, is fabricating a roof that he believes to be close to what the original may have been.

“Preservationists must stay steadfast,” Hayden says.  “Our first priority was to do everything possible to keep the original integrity of the log building as close to the original builders’ intent as possible - trying to adhere closely to the Secretary of Interior Standards for Historic Rehabilitation.  This took a lot of study, research, time and last but not least - new Douglas fir wood and lots of money to hire the labor of qualified and knowledgeable craftsmen.

“We definitely had to be open to making some modifications since another priority was to make the building accessible to the pubic inside and out.   The good news is we will have a building that will last at least another 100 years (hopefully) with ongoing maintenance - that can be enjoyed by generations of new learners and architectural history buffs.” 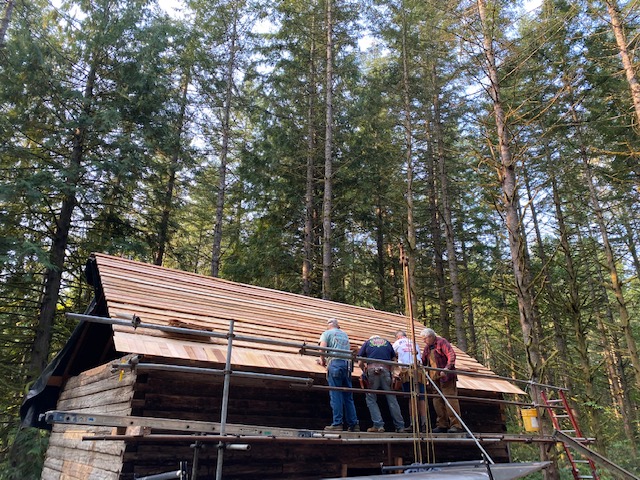