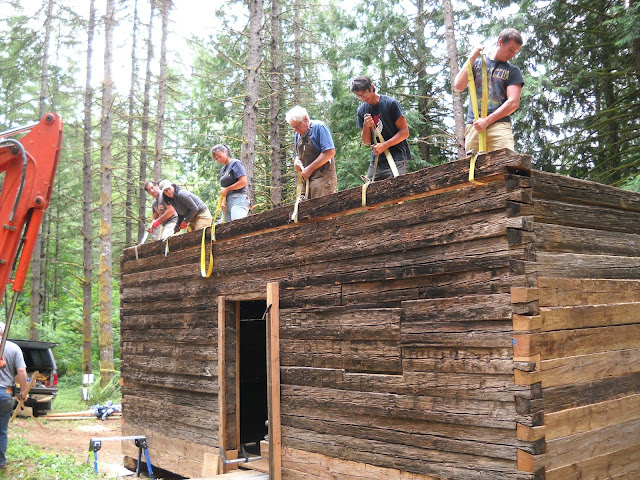 We venture out of our customary urban jungle today to celebrate reconstruction of what might be Oregon’s oldest building.  It is known as the Molalla Log House, but perhaps a more fitting moniker might be Oregon’s House of Mystery.

hat’s mysterious?  Try these:  Who built it?  When? Where?  “I don’t think we’ll ever know for sure,” says Pamela Hayden, a former Clackamas County preservation officer who first learned about the hand-hewn structure located south of Molalla in 1984.

Whoever built it wanted it to last.  The angles on the dovetails at the base of the building are more acute than on the timbers above, perhaps as a means to making the base even more secure.

“It’s a very 'un-pioneerish' building,” says Gregg Olson, a preservation scholar and master woodworker who has been involved in numerous restoration projects since 1972.  He said most log buildings in Oregon’s pioneer era never were meant to last more than a few years.  Along with Hayden, he has been studying and working on the Molalla house for many years. 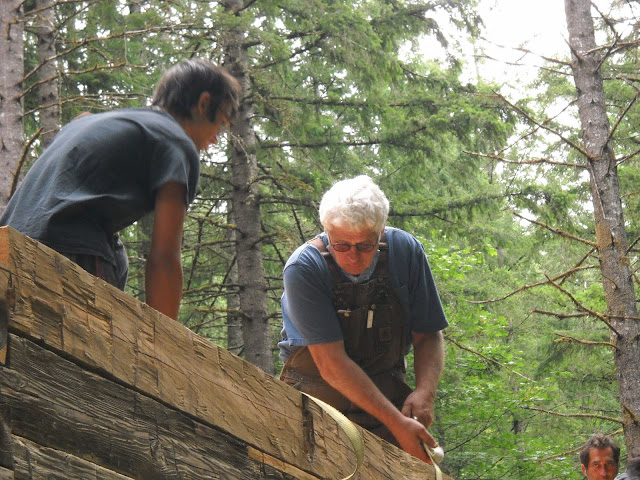 The house was in poor condition when it was carefully removed from its second site in 2007. While in storage at differing locations out of the weather, Olson determined which logs needed to be replaced and carefully cut new Douglas fir timbers to fit.  Meanwhile, Hayden continued her research and lobbied to find an appropriate new home where the building could be reconstructed.

It took many years to find a site that was appropriate for this unusual building, and where the building made some intellectual sense with its setting.  The solution finally arrived when the Hopkins Demonstration Forest, a 140-acre privately-owned site northeast of Mulino, agreed to accept log house.  The forest is run by the non-profit Forests Forever,  Inc.

Hayden likes the new site because it may closely represent the kind of environment where the house was first built.  The house was moved to its second site in 1892, but no one knows where it was first erected.  The demonstration forest liked the idea of showing how wood was used historically as a vital building resource -- just as it remains as a vital resource for housing today.

Which brings us to the controversies of when and why.  Under the best conditions, dendrochronology, a technique analyzing comparative growth rings of trees, can establish dates to a specific year.  But the task is complicated by not knowing precisely where the old logs were harvested.  Olson said one analysis puts the date of the Molalla logs at 1883, while another interpretation makes that date as early as 1795.  Looking at the slow pace of log-end erosion, Olson believes the fraction of an inch deterioration in the Molalla logs suggest the earlier date.

If the building is in fact older than the Lewis & Clark Expedition, who built it?  The dovetail construction method has roots both in Scandinavian and Eastern European vernacular building traditions.  Possible builders likely were trappers and hunters who could have had French-Canadian or Russian connections.  Russia had established a presence in Northern California early in the 1800s. 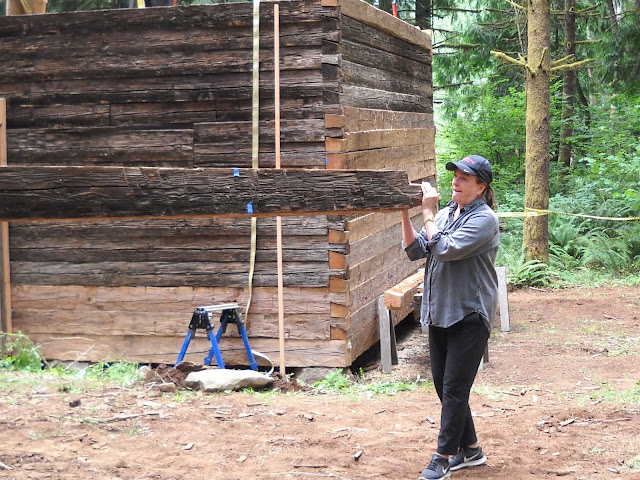 However, historians also believe that if  the Molalla house had been built before the Lewis & Clark era, SOMEONE would have known about it and somehow made a lasting note of it.  So far, no such evidence has been found.While the questions about who and when remain unanswered, volunteers hope to complete reconstruction of the house by this fall.  After a gable roof is installed, the structure will be used for special events and history lessons at the demonstration forest.

During reconstruction, Olson and Hayden decided to reinstall timbers the old-fashioned way.  A backhoe set the timbers on racks near ground level, and volunteers using straps carefully hoisted them into place.  "Of course they would have used ropes in the old days," Hayden said.

The third site for the home will be more stable than the first two.  While it appears to be sitting on several boulders, there are tons of concrete hidden below the surface and the house has been firmly attached.  “It all has been engineered,” Olson said.

The same goes for steel rods placed in holes drilled down through the walls.  “We really didn’t want to do that, but if people were going to be inside, we had to,” Hayden said.  Regardless of its venerable age, this is how the Molalla Log House is welcomed into the 21st Century.

Preservation and restoration of the Molalla Log House has been supported by grants from the Kinsman Foundation, a Milwaukie, Oregon foundation that supports architectural preservation projects in Oregon and Southern Washington state.

Given what appears to be a secure and lasting location for the Molalla Log House, one wonders if technology and historic serendipity will eventually provide some answers to the building's mysteries.