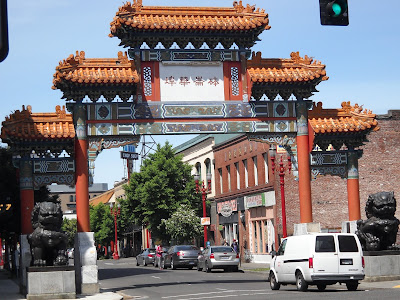 Short answer to the question above: Not enough  people to make the Portland City Council change its mind about a 200 foot height ceiling it tried to impose in 2018.

After getting its wrist slapped by the Land Use Board of Appeals and the Oregon Court of Appeals last year (see May 6 article below for the background) the council held a hearing on May 28 aimed at resolving the matter.  Although a final council vote will not happen until July, developers, architects, a lawyer and even some members of the Asian communities expressed support for the 200 foot height.

Before the council adopted the 200-foot maximum in 2018, the city Planning and Sustainability Commission had urged a 125 foot limit.   The Court of Appeals agreed that the council had not provided justification for the taller height limit “preserving and complimenting historic resources” as required by the city’s masterplan.

Although the City Council is not expected to change the 200 foot height when it takes a final vote, this fight is far from over.  Mayor Ted Wheeler said the Portland Historical Landmarks Commission would continue to rule on height and massing in an attempt to make new buildings fit the context of the rather tiny, ten square-block district.

“The Landmarks Commission will continue to do our job,” declared Kristen Minor, the commission’s chair, who objected to the 200 foot limit. But she added that when the council acknowledges the possibility of excessive heights and bulk, “You send a message that our work is just an obstacle to be overcome.”

Rulings by the commission can be appealed to the City Council, but appeals have been rare historically.  Developers don’t like losing the additional time and money to undertake appeals.  When the difference might be between a five story building and 18 stories, that expense becomes less relevant. Minor's dedication to the Landmarks Commission's role suggests the strong possibility of new conflicts between the commission and the City Council when the economy revives.

When it was approved in the late 1980s, the district spanning Third to Fifth Avenues between Burnside and Glisan Street contained buildings mostly one to four stories, Minor said.  The tallest was seven.  Since then, new buildings of eight and 16 stories have been added. Minor said 15 story  heights are not compatible with the district's historic context. Lynn Fuchigami Parks, executive director of the Japanese American Museum of Oregon, said many Japanese recall seeing their businesses and possessions wiped out quickly by internment during World War II.  She said Japanese now envision “erasure” of the neighborhood where they once had established a foothold.  “This neighborhood means everything to the Chinese community as well,” she said.

Raymond Cheng, a director of the Lan Su Chinese Garden that lies just outside the historic district, said  garden officials originally feared that 200-foot buildings would cast shadows impairing plants and fish at the garden.  He said the board changed its position when it learned that shadow studies required by the city would prevent those problems.

Helen Ying, chair of the nearby Old Town Community Association, also supported the greater heights, as did James Wong, who described himself as a property owner and developer.

Peggy Moretti, executive of Restore Oregon, a statewide architectural preservation advocate, described the district as a “fragile historic place that could be swallowed up by out-of-scale buildings.”  She urged the city to find ways to help owners brace their buildings against earthquakes and to require owners to make improvements so buildings do not deteriorate from “benign neglect” to become eligible for demolition.  The prospect of taller buildings could be a disincentive for maintaining older buildings on valuable sites.

The council will hold a work session on July 2 to discuss any possible changes.  The odds of the council accepting any lower heights likely are about the same as modern science proving the pandemic to be a hoax.

While the pandemic endures, the Architectural Heritage Center is adding some interesting videos about Portland's architectural history.  So far, Val Ballestrem, the AHC's education manger, has narrated these productions:

A.E. Doyle, one of Portland's most productive architects in the first half of the 20th Century

These videos run six and seven minutes each. If our architectural history interest you, these will be enjoyable "views."