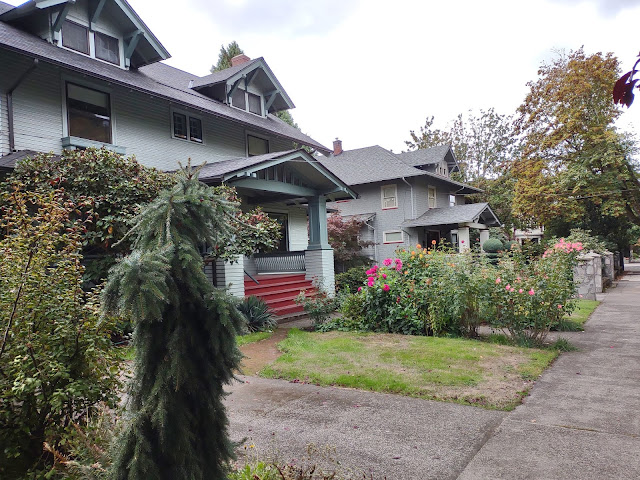 A long political war of attrition against architectural preservation and historic districts by the Portland homebuilding lobby returns for what could be a developers’ triumph at a Portland City Council hearing that begins Nov. 3.

A major revision of Portland’s rules for designating and protecting city’s historic landmarks would dilute the membership and authority of the Portland Historic Landmarks Commission, and cede more responsibility for historic matters to the developer-driver Portland Planning and Sustainability Commission.

Assuming they are approved, the changes probably will make it harder to create new historic landmarks and allow the city to chip away at the city’s existing districts, either block by block, building by building or by elimination entirely.  Gossip also suggests that amendments may be offered to the City Council that are even more severe than the proposed code changes.

The proposed rules, in concert with earlier changes by the Oregon Legislature, whittle away at protections in National Historic Districts to varying degrees, depending on when the districts were approved by the National Park Service.

In reviewing proposed reductions in historic districts, the Planning and Sustainability Commission could advise the Council that the goals and policies of the city’s Comprehensive Plan are “equally or better met” by reducing the level of historic protection.  For a commission incessantly oriented toward new development, that clause is a loophole big enough to make room for bulldozers.

The revisions include many goals sought by the developers for the past seven years or so at City Hall and at the state Legislature.  Economic, environmental and historic values as mean little to the developers, whose primary desire is to demolish old houses and built expensive new housing in Portland’s popular National Historic Districts, such as Ladd’s Addition, Irvington and Northwest Portland’s Alphabet District.

Interestingly, the current Landmarks Commission member are not expected to oppose the new rules.  Kristen Minor, the landmarks chair, said some aspects were “a bit of a surprise,” but added, “There are some really great things in their as well as some we are concerned by.”  For whatever reason – perhaps reading the handwriting on the wall – the seven current commissioned are expected to stay silent.

Some elements to the proposal that will win support from the preservation community.  These include better opportunities for placing solar panels on historic properties, and allowing demolition of stand-alone garages to make more space available for accessory dwelling units.

It is disturbing, however, to see the quality of landmarks commission members and their jurisdiction diluted in the proposed new configuration.

Current rules require five of the seven landmarks members to have professional experience or expertise in preservation–related areas.  The proposed rules suggest that all seven members have “an interest” in preservation, but all new members, appointed by the mayor, conceivably could know little about it.  Filling the commission with bankers, economists and contractors will make preservation even more of an uphill fight.

Given the scope of the bulky code revisions, this article cannot dwell on all of its aspects.  Those who want to read the proposal itself can find it here:

Meanwhile, preservation advocates have created a new website that outlines the benefits of preservation as well as commenting on the proposed city code changes.  The site provides easy access for sending comments to City Council members.  See it here:

Despite the antipathy by the current council and the Planning and Sustainability Commission against preservation, there is something they cannot change: The actions of home owners, entrepreneurs and building owners who maintain our vintage buildings for the economic, social and environmental value they represent.  They deserve our continuing respect.

CLARIFICATION: The comments above about Portland’s proposed overhaul of rules for adding or removing historic landmarks and landmark districts missed a key point that could be a benefit to preservation advocates.  The proposed rules streamline the process and reduce costs for seeking landmark status for individual sites, and recommendations to the City Council would be made by the Portland Historic Landmarks Commission.

However, the Planning and Sustainability Commission would be the body involved in recommending additions or changes to historic districts.  Given the makeup of the current commission, is it’s laughable to think they would propose anything but reductions to the city’s landmark districts.