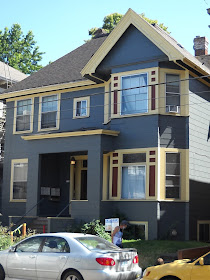 Few Portland neighborhoods care as much about their architectural heritage the sprawling Northwest District Association.  Back in 1989, several residents in the “save the good old houses” movement had to be dragged by police from the porch of a house scheduled for demolition.

The drama likely won’t be as great for a residence at 2124 N.W. Flanders St., one of several in the vicinity built and occupied by the powerful Simon family.  In its early years it was the home of Nathan Simon, a lawyer and brother of the one-time Portland mayor, U.S. Senator and Oregon Senate president  Joseph Simon, who lived directly behind in a housing facing on Everett Street.
For 35 years or so, Joseph Simon was one of Oregon's leading power brokers in an era from 1880 to 1915 of bare-knuckle fighting between two factions of the Republican Party.

The Nathan Simon house missed being added to the neighborhood’s historical inventory in the 1980s.   It apparently was missed as a result of confusion involving the city’s change of addresses in the Depression.  Demolition of a “contributing” building in the Alphabet National Historic District could be opposed at the Landmarks Commission and to the City Council.

Both the house’s interior and exterior have changed dramatically over the decades.  A big addition was added to the back (without a proper foundation) and the house was divided into 14 units – some so small they lack a bathroom.  What once likely was an elegant front porch was shortened to a stub and the whole building was encased in asbestos siding.

A developer proposed tearing down the house in 2010 and replacing it with an apartment building, but that developer moved on to bigger projects elsewhere.  Now, new owners are proposing a larger project of five stories and 19 units.

The Portland Historic Landmarks Commission came within an eyelash of approving the apartment plan on July 27, but wants to see some potential revisions to the fifth-story penthouse at a meeting next month.  The commission made it clear it has no ability to delay or recommend against demolition.

“We don’t get to tell the applicant NOT to tear down a non-contributing building in a historic district,” said Kristen Minor, commission chair.  “It’s not in our bailiwick to say yea or nay about taking it down.”  Maya Foty, a commission member who is a preservation architect, said the thought of removing a historic building gives her “heartburn,” but she added, “I can’t step outside the rules.” 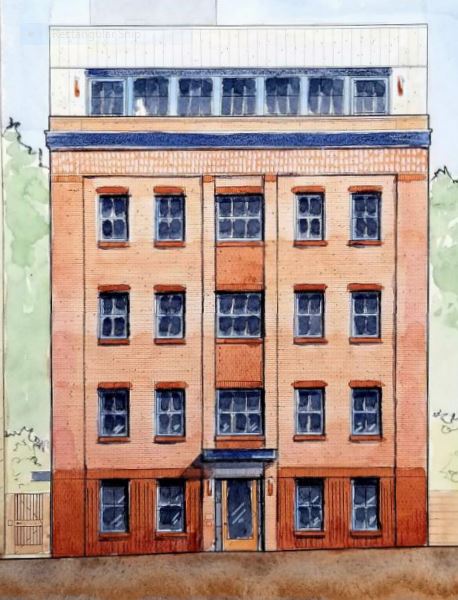 Proposed apartment building (Emerick Architects)
Dennis Harper, a member of the NWDA planning committee, said the committee was opposed to the building’s 65-foot height and reduced side yards.  Like many other testifiers, he said the neighborhood regrets the loss of affordable units.

Joel Drummond, who said at 12 years he has lived in the building longer than other tenants, praised the owner, Elliott Gansner, as a good landlord who has made it clear to all tenants that demolition was a likely outcome.  “We are all grown-ups,” Drummond said.  He added that tenants likely will have eight months’ notice to relocate.

Aaron Dawson, another tenant, said he was aware of a potential tear-down, but despite what he said were 16,000 vacant units in Portland, finding one that was affordable was still difficult.  “You could put me back to living in my car,” he said.

Gansner said he has not raised rents in the two years he has been involved in the ownership group.  He said all tenants will be eligible for relocation assistance.  “I will dedicate as much time as necessary to help them find locations,” he said.

Gansner said the building was in such bad shape, renovating it was not economically viable.  “It has continued to be affordable (for tenants) because prior owners didn’t make the capital improvements that were necessary.” As for demolition, he added, “We don’t really have a choice.  The building is not sustainable in the current state.”

Designed by Emerick Architects, the proposed building takes cues for its primary façade from many brick-faced apartments built in the neighborhood in the 1920s.  The north-facing façade would be brick for four stories, with the penthouse set back from the front by nine feet.  Units would range from as few as 319 square feet to 950.  Units facing the south and west sides would have small outdoor decks.
The block on which the building would sit currently contains other apartment buildings in addition to some Victorian-era houses that appear to be well-maintained.  The proposed building would be the tallest on the block.
The Emerick firm is well-regarded in preservation circles, both for renovating existing buildings and for designing new ones that fit the context of historic districts.  Brian Emerick is a former member of the Landmarks Commission; he was on the commission in 2010 when a the earlier developer, Dennis Sackhoff, earlier developer proposed demolishing the Nathan Simon house. 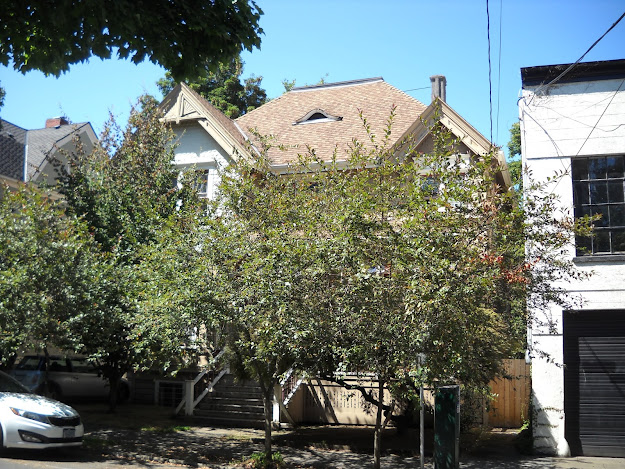 The Joseph Simon house, shown above, is difficult to photograph because of the trees. It sits immediately south of the Nathan Simon house.  Built in 1892, the Joseph Simon house still reflects its original Queen Anne style architecture with the double front gables, eyebrow dormer and fish-scale front shingles.  Unlike its younger sibling, it is listed as a contributing building in the Alphabet historic district.