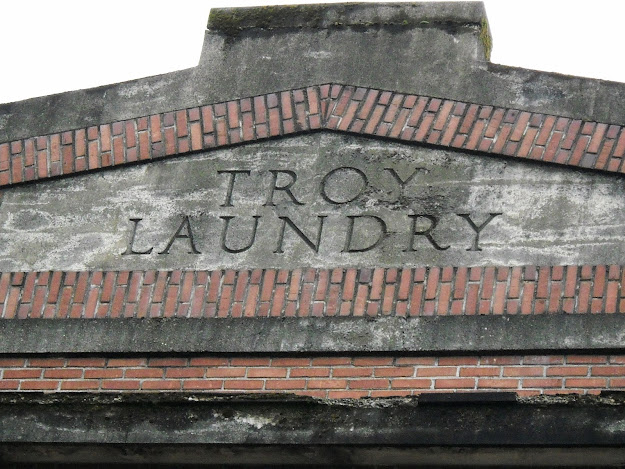 Household washing machines were far in the future when James F. Tait, a Scottish immigrant, opened his Portland laundry service in 1889.  In the following decades, Tait pioneered technological and managerial innovations to make Troy Laundry the biggest residential and commercial laundry company in the Pacific Northwest.

In 1913 Tait moved into his big new building at 1025 SE Pine, a half-block, two-story colonial revival building designed by Ellis F. Lawrence. Lawrence played an important role in Oregon architecture for decades, serving as dean of the University of Oregon's architecture school in addition to running a busy practice.  It is said that Troy Laundry served as many 10,000 customers on a regular basis.  In the following decade, Tait also built a major laundry building in Seattle.

Laundry operations ceased in the building roughly 40 years ago, and the sophisticated industrial building has been on the National Register of Historic Places since 1989.  The best hope for many old buildings that have out-lived their original uses is to find successful new ones.  This building is now likely headed for a use as a private athletic club, where, one might say, the affluent will go up on the roof to get soaked.  (Details below.) 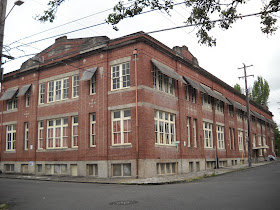 A Chicago-based developer has bought the laundry as well as the other half of the block, where a six-story, 132-unit residential building with ground-floor retail and two floors of undergound parking  has been approved. Facades of the building will be detailed with brick and ground floor space will be intended for retail use.
"The proposed building features high quality materials and fine detailing and will be a welcome introduction to the neighborhood," the final report of the Portland Historical Landmarks Commission says of the Ash Street plan.
Renovation plans approved by the landmarks commission for Troy Laundry show detailed restoration of the bricks and windows in addition to seismic bracing new mechanical equipment. The remodel would eliminate that aluminum awnings on the second floor and the metal canopy over the front door.  Those elements are not original fixtures.

The trickiest part of the proposed remodel is the addition of a penthouse on the roof with a swimming pool and rooftop terrace.  The penthouse would back up against the proposed  new building on the north, and would be set back from the eastern and western parapets, making it largely invisible to pedestrians across the streets.

"The views from up there will be spectacular," said Andrew Becker, a Chicago architect. 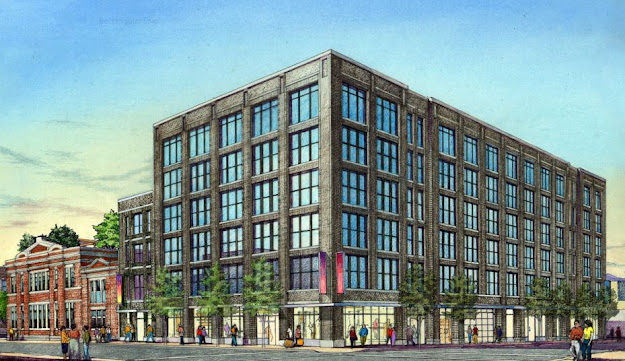 1010 S.E. Ash St. (Hartshorne Plunkard Architecture)
Some commissioners were concerned about how the back of the penthouse would look if the new building  at 1010 S.E. Ash St. is never erected to hide it.  "We are fully committed to that building," said Alex Stanford, a representative of the Chicago developer.  "That building is definitely moving forward."
The landmarks commission had jurisdiction over the new building on Ash Street because it will sit in part on land that once was associated the the landmark Troy Laundry business.

Landmarks commissioners had no major objections to adding a penthouse on the laundry building, but one commissioner opposed it in a 4 to 1 vote, saying he thought it was too bulky.  In general, the commissioners spoke approvingly of detailed steps for restoring  the brick facades,  windows and doors of the historic building.  "This renovation is restoring the building for another 100 years," Becker said.
As for the penthouse, "I think the roof deck is an amazing amenity," said Commissioner Matthew Roman. 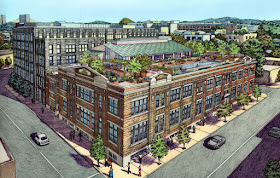 Troy Laundry with penthouse (Hartshorne Plunkard Architecture)
The company most notable in the Portland area for repurposing historic buildings is McMenamins, the family-owned business that has transformed numerous old buildings for use as restaurants, bars, lodgings and film and music venues.  The Troy Laundry project is a bold similar step in finding a creative new use for a worthy historic building.
These two buildings sit just a few blocks outside of East Portland Grand Avenue National Historic District.  The near east-side neighborhood is undergoing a rare boom in proposed new buildings and renovations of old ones.  We will examine some of these changes in future articles.